Please note, this article and graphic first appeared on March 12, 2013 on the MedIll Reports website at http://news.medill.northwestern.edu/chicago/news.aspx?id=218389 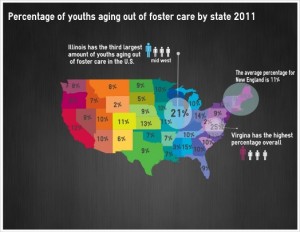 James McIntyre, of Waukegan, was in foster care for 15 years, bouncing from foster homes to group homes until he aged out last April at 21. This past year has been a struggle for him.

“I only have me to rely on,” said McIntyre who lives paycheck to paycheck as a receptionist at a dental office. “If I don’t wake up for work tomorrow, I’ll get fired and then I’m homeless.”

McIntyre grew up in foster care. His parents are the state’s foster care system, and a house filled with 17 other boys was what he called home.

“It’s very discouraging to see that the kids I grew up with are in jail,” he said. “I think to myself — you are going to be next,” said McIntyre who doesn’t want to be another statistic.

In 2011 Illinois had the third largest number per capita of youths aging out of foster care in the country, also referred to as emancipation. Virginia had the highest followed by Washington, D.C. and Maryland. With such poor permanency rates, an average of 21 percent of foster youths in Illinois were forced to transition into adulthood without adequate family or adult support.

For almost 20 years, Illinois has offered services to foster youth until the age of 21. Currently only 15 other states have extended the age from 18 to 21.

Once in the child welfare system, children are either reunified with their families, placed for adoption or given foster parents. The others are bounced around within the system from foster homes to group homes to residential or transitional living.

The goal of the Department of Children and Family Services is to ensure that foster care is a temporary safe haven for these children, said Dave Clarkin, spokesman at DCFS. Foster care is not a permanent solution, but rather intended to protect the child from abuse and neglect, while ultimately trying to reunify the child with his or her immediate or extended family.

Over the past decade, DCFS has rehabilitated its philosophy. Children were originally removed from their homes for precautionary reasons, but now only when it is absolutely necessary. If reunification with their families is not possible, the department tries to find permanent adoptive families or foster homes for these children as quickly as possible, Clarkin said.

But at 21, all support from the state is eliminated.

“The state needs to ensure that there will be resources, connections and support in place to help them have a healthy, safe life and to improve their standard of living and well-being just like you would your own child,” said Turpeau, who aged out at 21.

Youths who age out are faced with severe challenges such as unemployment, homelessness, incarceration, and education deficits, according to a 2011 study by Chapin Hall, a research and policy center at the University of Chicago for children and families.

Of the 732 study participants from Illinois, Wisconsin and Iowa, by age 23 or 24, almost 30 percent reported they had been homeless for at least one night since exiting foster care. One quarter did not have high school diplomas and only 6 percent had college degrees, which includes two year programs.

Almost 50 percent of the young men had been incarcerated and almost half, both women and men, were not working at any given time after exiting care.

“If my parents kicked me out at 18 or 21 to support myself by finding my own housing, education, job, healthcare, etc., I wouldn’t be able to do that,” said Amy Dworsky, senior researcher at Chapin Hall who directed the 2011 Midwest study. “It is unrealistic to think that the kids who age out of foster care will be able to do this.”

Although youths age out of the system at 21, there still needs to be transitional services for them to adjust to self-sufficiency, Dworsky said. There needs to be a training-wheel progression; otherwise DCFS is just pulling the rug out from under these kids, she said.

On your 21st birthday your entire life changes, said McIntyre.

“If you don’t rise to the occasion, you will fall after the age of 21. If you don’t get up when you fall, you will stay down,” he said.

Although Illinois has one of the lowest numbers of children per capita entering the system, more than 900 youths aged out this year, according to the U.S. Children’s Bureau.

After the age of 13 one’s odds of being adopted decrease, said Dworsky. No one wants to adopt a teenager who has undergone severe trauma and may suffer both behavioral and mental problems, she said.

Since older youth tend to stay in the system the longest, they drive up the average stay in care, Dworsky said. Currently, Illinois has the longest stay in foster care in the Midwest with a median stay of 28.6 months, five months above the national average, according to the U.S. Children’s Bureau.

Mike Shaver, chief operating officer of Children Home + Aid of Illinois, attributes the high emancipation numbers to the remodeling of DCFS’s practices over the past decade. In 1997 Illinois had approximately 51,000 children in care. Currently there are an estimated 15,000 children. DCFS has made great strides in decreasing the number of children entering foster care, but now the youths who enter the system have much more emotional, mental and behavioral problems than before, therefore are harder to place in permanent homes, he said.

“DCFS needs to invest more in services that provide social and emotional support so that these kids can capitalize on the concrete services the state offers, like employment, education and job training,” Shaver said. “These are some of the most compromised kids—these stand-alone programs in and of themselves will not allow these kids to be successful if they are not attached to social and emotional services.”

Within McIntyre’s residential living program there were three staff members and one therapist for 20-plus youth. “Now tell me these kids are receiving the adequate services,” he said.

On average parents provide their children with approximately $38,000 from the ages of 18-34, according to a 2011 Chapin Hall Study. This includes money for rent, utilities, car insurance, gas, college and various other expenses. This does not include health insurance. Only 57 percent of the foster youth in the Midwest study had health insurance and two-thirds of them were covered by government programs like Medicaid.

Despite foster youth being deprived of financial support from their parents, the state expects these already compromised youths to become entirely self-sufficient on their own by age 21, Shaver said.

“The state has been their parents for 8, 9, or 10 years and then at 18 or 21 we are done with them and expect them to do something most kids this generation cannot,” he said.

Besides financial assistance, these foster youths need role models to help guide and motivate them, said Turpeau, who has been in touch with his mentor for 23 years. He was assigned a mentor at age 10 while at Lydia’s House, a group home on the West Side.

“I’ve messed up a lot, and I’ve done some very, very bad things as a teen and as a young child, but I had people who never gave up on me,” he said.

As a teenager Turpeau was engaging in unspeakable activity while on the streets of Englewood, but with the help of his role models he was able to escape that lifestyle, he said. At 16 Turpeau moved from Englewood to Park Ridge where he lived with his newfound foster parents. He eventually attended Elmhurst College, where he played football and ran track, he received a master’s degree in social work at Loyola University, co-founded a non-profit organization, and is a husband and father of three.

Almost four years ago, Turpeau along with two other foster wards opened the doors of Struggling Youth Equals Successful Adults, which provides foster youths with mentors and life coaches. The organization is built on the philosophy that foster wards need genuine support, stability and connections, particularly from people who can relate to where they’re coming from, Turpeau said.

In October Richard Calica, the director of DCFS, set out to improve the state’s permanency rates to prevent children from growing up in the system. He created Permanency Achievement Specialists, whose job is to ensure that permanent homes are found for these children as quickly as possible. These positions are in the process of being filled.

DCFS cannot provide solutions to the state’s foster care system on its own, Clarkin said. Illinois needs more financial assistance, more foster parents and more people reporting neglect and abuse as soon as they suspect it, he said.

“The most important thing that these kids need, the state of Illinois cannot provide them, and that is love.”

There are no upcoming events at this time.